Who am I? I wish I knew... I feel like I had several different lives. 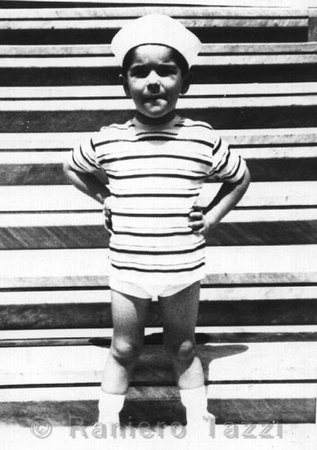 1967: I learned how to read and write while watching a TV program catering to illiterate adults called "It's never too late". I quickly understood that this was the knowledge I needed in order to avoid continuously asking my mother to read all the signs around. Shortly after, I was able to read some of the many books my mother had in the house. That same year, I saw a Disney movie, which would change my life -- “The Legend of the Boy and the Eagle.” I believe my passion for American West started there.

1968-1969: I saw on TV all the Apollo project and the first man walking on the moon. My curiosity about Space spun out of control. Like many of my generation I decided that I would be an astronaut. Obviously this didn't happen, but still now I regret it didn't and wish I was one of the 12 who made it: walked on the Moon!

1969: I took my first photo. My father gave me his camera, an already very old "Ferrania Rondine", to take a photo of him and my mother. He sent me to the other side of the street to make sure I would include the Garda Lake in the background.... Oops, wrong timing! Months later after developing the roll he got as a surprise a free enlargement of the photo. The lab photographer was attracted by the weird photo and asked who took it...... 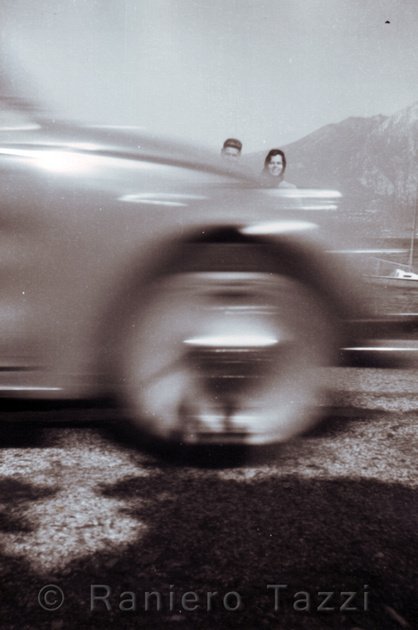 the photo is shown here, on the right.... and the weirdo of course was myself!

1969: October 1st. Finally first day of elementary school. I did not understand why everywhere there were huge alphabet letters framed on the walls. First thought that crossed my mind: “Am I in a school for the near-sighted?” I found that the school was very boring, and I did not understand why I had to write so many huge "A's" on the first page of my exercise book. While the teacher was smoking in the corridor, chatting with her colleagues, I finished the page of "A's”' and at this point thought the first day was over. I packed my bag and walked towards home. Just in front of the door of my building I felt a huge hand stopping me, holding my neck from behind. It was the janitor of the school who ran after me and took me back to school, not caring at all about my protests. The teacher was furious and wrote a negative note on my page full of "A's", with the explanation of my mutiny, to be read and signed by my parents. Not a great start indeed.

1972: I wrote to NASA a letter (in Italian), asking them to send me a few photographs of their space missions. Six months later, I got a package from the US with pictures of astronauts, Apollo's taking off, Skylab, etc. I got ecstatic! Encouraged by the unexpected result, I wrote to them again, saying I wanted to be an astronaut. No answer this time..... NASA hellooooooo, it's 2018 and I am still waiting!

1974: I learned how to play chords on the keyboard to join my friends in a rock band.

1979: In the newspaper I read an ad for a concert of a pianist Nikita Magaloff, mentioned as one of the best in the world. At that time for me the best in the world was rock star Keith Emerson. I had never heard a classical pianist before and begged my parents for a ticket. The composers in that program were: Schubert, Schumann, Scriabin, Stravinsky... My love for piano was born. I gave away to a friend my whole Rock LP's collection and I started buying loads of classical piano recordings.

I wanted to learn how to play the piano and started taking piano lessons. My dream was to play Debussy. That same year, a friend and neighbor, Mauro Scarpelloni, wanted to become a photographer and showed me his very nice books of photography. I got hooked and went to Rome to buy my first SLR camera. The only one which was affordable for me at that time was a Russian Zenit TTL. I shot immediately a 24 photo black and white film, an Ilford FP4, which I developed together with my friend Mauro.

1983: I bought my first serious SRL camera, a Nikon FE, on occasion of my first travel abroad to London.

1985: I met a few photographers from my area who were organizing a photography course, which I completed. I learned a lot from Enrico Andreozzi †, Pino Antonelli †, Enrico Moretti, Sante Castignani.

1986: I got my DMA in piano from Perugia Conservatory. I was very happy, but as I never made it to be an astronaut, I already knew I would never be a great concert pianist, and I started making my living teaching piano privately.

1988: I opened a photo studio of commercial and industrial photography. I worked with Nikon and Leica (35mm), Hasselblad and Pentax 6X7 (medium format), Wista and Wista Field (4x5" large format and View camera). Even if often I worked in another field of photography, my models and inspirations were photographers like Ernst Haas, Pete Turner, Jay Maisel and of course the legendary Ansel Adams and Edward Weston.

1992: I started missing the classical music field and tried to combine the love for music with photography, taking photos for the concert series in Perugia, the place where I had heard Nikita Magaloff for the first time many years before. Thanks to this activity, I had the chance to meet and take photos of some of the most important musicians of our time.

1995-2010: I met my business partner Paola Castellano and decided to open Studio Art Concert Agency. We were representing world-known classical music artists and orchestras. To name but a few, there were the Amsterdam Royal Concertgebouw Orchestra, the London BBC Symphony Orchestra, and I had projects with musicians like the conductors Joshua Rifkin, Daniel Harding, Jiri Belohlavek, Charles Dutoit, Sir Andrew Davis, the pianists Robert Levin, Martha Argerich, Andras Schiff,  Pascal Roge', Lang Lang, the violinists Sarah Chang, Chantal Juillet, the percussionist Evelyn Glennie, the clarinetist Michael Collins (also the name of the Command Module Pilot of Apollo 11; another sign of my destiny that was not to be?), and many others that would be too long to mention here.

2010: I moved to Miami, USA and continue to follow both activities - photography and concert agency. Ending up in Miami, I got closer to NASA and Cape Canaveral. One day they will go back to the Moon and perhaps also to Mars and I hope they will consider me for those future missions. I may not be qualified or maybe not even competent, but the world is full of incompetent people doing the wrong jobs, so why not me? :)

2014-2017: I moved to Naples, Florida, and I represent the amazing Fazioli Pianos at Euro Pianos Naples for the State of Florida. In my opinion, Fazioli is simply the best piano in the world! Here I'm trying my favorite piano, the Fazioli F308, in the Concert Hall in the Fazioli Factory, in Sacile, Italy.